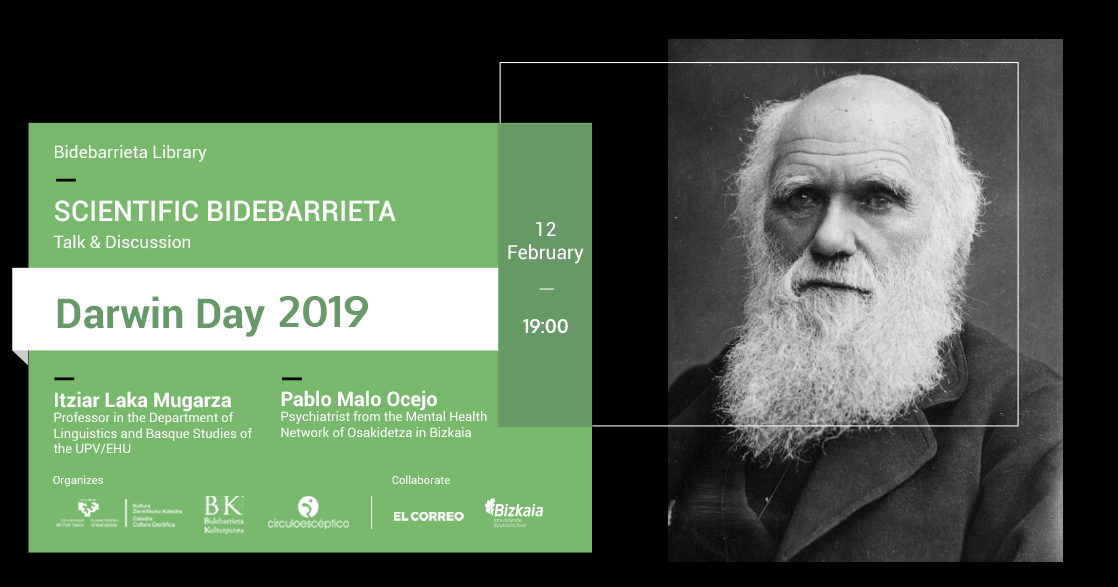 On 12 February Bidebarrieta Library in Bilbao will be joining in the celebration of the 210th anniversary of the birth of scientist Charles Darwin, author of the Theory of Evolution by Natural Selection. The Chair of Scientific Culture of the University of the Basque Country (UPV/EHU) and the Circulo Escéptico have organised another Darwin Day, which will focus on the evolution of language, and suicide and the Theory of Evolution.

The 13th Darwin Day will start at 7pm and will include talks by Itziar Laka Mugarza, professor in the Department of Linguistics and Basque Studies of the UPV/EHU, and by Pablo Malo Ocejo, psychiatrist from the Mental Health Network of Osakidetza in Bizkaia.

Itziar Laka, in her talk called “The Evolution of Language”, will analyse the scientific evidence of the origin and evolution of human language that has been gathered in recent years. It will help us to gain a better insight into the genetic and neurobiological foundations of language and the history of our species. The reasons why language has only developed in the human species will also be discussed.

Psychiatrist Pablo Malo will talk about “Suicide and the Theory of Evolution”: how suicide and other types of self-destructive behaviour are the product of natural forces and phenomena; how they are part of our own nature, even though our intuition often may tell us otherwise.

He will also discuss how the views and preconceptions that society has regarding suicide, which is historically considered to be a sin and even a crime, have been conditioned by our evolutionary history.

This meeting is part of the “Scientific Bidebarrieta” series, a monthly initiative organised by the Chair of Scientific Culture of the UPV/EHU and Bidebarrieta Library to discuss current scientific issues.

All of the talks are free of charge and open to all, subject to seating capacity. However, in order to enter, invitations must be obtained from the library, which will be available from 7 February. Invitations can be collected from 10am to 2pm and from 4pm to 8pm, Monday to Friday.

For those who are not able to attend, the talks are streamed live here.

Itziar Laka Mugarza is a Linguistics professor and Director of “La Mente Bilingüe” Research Group at the University of the Basque Country (UPV/EHU). Her research combines theoretical linguistics and experimental methodology of psycho-neurolinguistics to study the representation and neural computation of language, mainly focusing on syntax and bilingualism.

Pablo Malo Ocejo is a psychiatrist from the Mental Health Network of Osakidetza in Bizkaia He is the co-author of the book Psiquiatría Evolucionista: Una introducción and editor of the blog Evolución y Neurociencias. He is currently a member of the non-profit organisation Txori Herri Medical Association.

Darwin Day has been celebrated in the capital of Bizkaia since 2007 and it has become an event not to be missed by science lovers. Since then, the conference has included the participation of leading figures from science and dissemination, such as Maria Martinon, Pilar Carbonero, Juan Luis Arsuaga and Carmen Manzano, among others.

This event is organised by the Círculo Escéptico, the Chair of Scientific Culture of the UPV/EHU and Bidebarrieta Kulturgunea. El Correo newspaper and the Provincial Council of Bizkaia also collaborate in it.