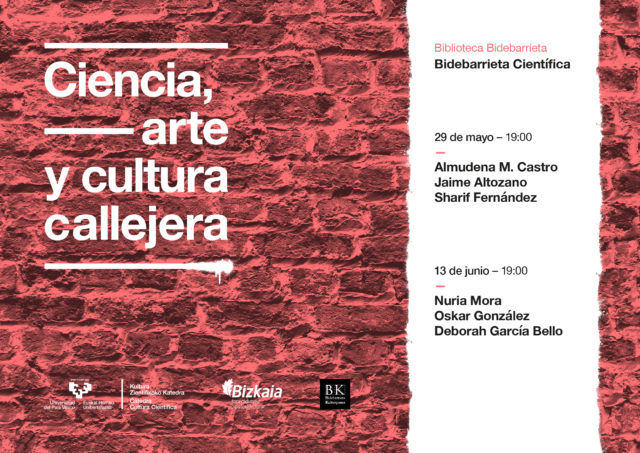 Culture has historically been associated with intrinsically human activity and therefore all those actions which give sense to our existence as human beings. In this regard, everything we do to get to know the world, better or please ourselves, or become self-involved can be defined as culture.

This term which covers many disciplines, whereby we as humans endeavour to classify different ways of acquiring knowledge and attempt to establish a scale of relevance, has defined a series of limiting borders. The definition of these limits leads to stereotyping both cultures, i.e. science and arts, as well as differentiating between the so-called high and low culture or subculture. But, are these borders really necessary and useful?

To address this debate and express an alternative view where art and science are intertwined, Bidebarrieta Library in Bilbao will host the cycle of “Science, Art and Street Culture” conferences on 29th May and 13th June.

This event is part of the “Scientific Bidebarrieta” series, a monthly initiative organised by the Chair of Scientific Culture of the UPV/EHU and Bidebarrieta Library to discuss current scientific issues.

The cycle of “Science, Art and Street Culture” conferences will start at 7 pm on the 29th May with a multidisciplinary session, with the participation of the composers Jaime Altozano and Sharif Fernández, and the physicist and pianist Almudena Martin Castro.

Those attending the event will enjoy an interesting discussion where current relationships between physics and music will be analysed, as well as key music aspects, likewise the relation between rap, music and poetry to address the gap between high and low culture.

The second and final session of the cycle will be at 7 pm on the 13th June, where the Chemist Deborah Garcia Cello, the UPV/EHU Lecturer, Oscar González Mendia, and the Artist Nuria Mora will discuss science hidden behind urban art techniques.

The speakers will bring the meaning of materials in the Pop Art movement, Dadaism, decoration, design and Kitsch closer to Bilbao. The keys to the confrontation between high and low culture will also be analysed in depth.

Admission to all talks is free but limited to the venue capacity. Invitations are required and will be available at the Library from 24th to 29th May for the first conference, and from 8th to 13th June for the last conferences.

For those who are unable to attend the event, the talks will be streamed live here.

Almudena Martín Castro has a BA degree in Fine Arts, is a Physics Graduate and also studied piano. Among other activities, she is currently involved in designing user experience and the popularisation of science in different media such as Quo, Radio Clásica and Naukas.

During her talk, the artist will analyse the unavoidable relationship between music and language from the viewpoint of human evolution. Today, many musicologists and palaeontologists associate music evolution with the onset of language.

Jaime Altozano is a music composer and producer known for his music exploration via Internet. His videos in YouTube, have had over 13 million visits, all sharing the same message: “learn to listen to Music in a different way”.

This slogan will be the backbone of his talk on 29th May. Altozano will be the driver of a peculiar journey throughout the history of music showing us how most music styles are inter-related.

Sharif Fernández is a Spanish music composer and rapper. He has over 20 years’ experience in music composition and verse creation and has released several records and the poetry book “Lo vivido vivido” (Living what has been lived).

In his fourth and latest record entitled “Acariciado Mundo” (Cherished World), the artist from Zaragoza reinvents himself in every sense, reaching out to flamenco and hip-hop with nods to trap and ambience influences. He will take a break from his tour to attend this event and share his particular insight into music and art.

Deborah Garcia Cello has a BSc degree in Chemistry and is a populariser of science. She has published the books Todo es cuestión de química (Everything is a question of chemistry) and ¡Que se le van las vitaminas! (Running out of vitamins!); and her blog Dimetilsulfuro (Dimethyl Sulphide) was awarded the Bitácoras Prizes 2014 and Tesla Science Foundation award in 2016. García Bello collaborates in several media and is a member of the Spanish Science Communication Association and the Science and Technology Communication Association.

Óscar González Mendia has a PhD in Analytical Chemistry and is a Lecturer at the Faculty of Science and Technology of the University of the Basque Country (UPV/EHU). Although his research focuses on the analysis of pharmaceutical drugs and metabolomics, he started teaching the Degree on Conservation and Restoration of Cultural Heritage of the Faculty of Fine Arts of the UPV/EHU three years ago. As a result of this experience he became interested in researching the link between science and art.

During his talk, González Mendia will discuss some of the most popular artistic fakes in history, as well as their economic and cultural impact. The UPV/EHU Lecturer will highlight the importance of Analytical Chemistry in the world of art to help verify the authors of artworks.

Nuria Mora is a contemporary artist of PostGraffiti and Street Art trends, and one of the forefathers of the latter. Her work has been exhibited at international art galleries and museums including the Museum of Contemporary Art in Johannesburg and the Tate Modern in London.