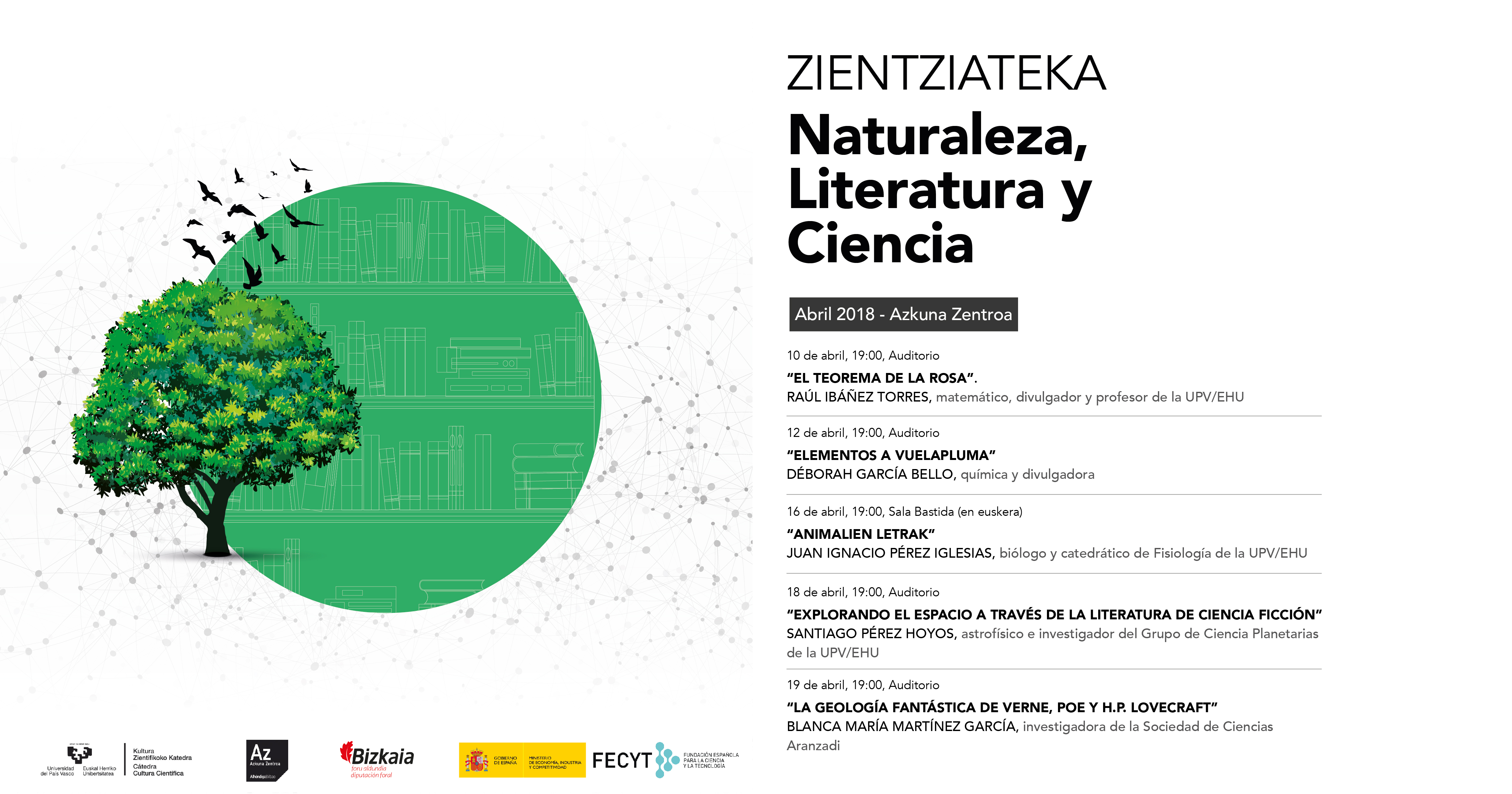 The convergence among different fields of study has always been a wonderful tool to reflect globally and reliably the reality of each era. In this sense, the connection between nature, literature and science is, perhaps, one of the most marvellous ways that human beings have to design a window from which to contemplate and teach the world from multiple and complementary perspectives.

The unification of these three areas of knowledge will be the main theme of the conference cycle “Nature, Literature and Science” that Azkuna Zentroa will host from 10 to 19 April. The event, framed in the “Zientziateka” programme, will include five conferences presented by scientists who will seek to combine the interaction of nature and the social environment reflected in the literature

The cycle “Nature, Literature and Science” is organized by the Chair of Scientific Culture together with Azkuna Zentroa and in collaboration with the Provincial Council of Bizkaia and the Spanish Foundation for Science and Technology (FECYT), and it will serve as a prelude to the eleventh edition of Gutun Zuria, the International Literature Festival of Bilbao (Festival de las Letras).

The new edition of this popular literary event will become a meeting point for national, international and local writers and the general public from 23th April at Azkuna Zentroa. The event will focus on the work of the writer Henry David Thoreau, renowned as the defender of the natural universe. Taking as a backdrop the bicentenary of Thoreau’s birth, which was celebrated last year, the theme of the Festival will be literature and nature conservation.

The mathematician and professor of the UPV / EHU Raul Ibañez Torres will be in charge of inaugurating on 10 April, a series of lectures regarding “Nature, Literature and Science”. In his conference entitled “The Theorem of the Rose“(El teorema de la Rosa), the scientific disseminator will talk about the importance of mathematics as a fundamental tool for studying nature and understanding its beauty. The aim of this talk is to introduce the public into the mathematics of nature through the critical and creative eye of current literature. For this purpose, Ibañez will provide the audience with some simple and interesting examples, such as the Fibonacci sequence, the golden ratio, the knot theory or fractals.

The second conference, entitled “Sudden Elements” (Elementos a vuelapluma) will take place on 12 April and will be chemist and disseminator Deborah García Belloso‘s responsibility. In her presentation, García Belloso will analyse the leading role played by chemistry and its phenomena in literature. The speaker will invite the audience to immerse themselves in books and songs in which chemistry has sneaked in and has become a powerful literary element.

On the third day, to be held on 16 April, the biologist and professor of Physiology at the UPV/EHU Juan Ignacio Pérez Iglesias will bring to the audience the unexpected, and sometimes, beautiful relationship that exists between biology and literature. In his presentation, “Animalien letrak” (The literature of animals), which will be taught in Basque, Pérez Iglesias will analyse the influence that the close relationship between human beings and animals has had in literature, cultivated or popular, as well as in other artistic manifestations, throughout history.

The astrophysicist and researcher of the Planetary Sciences group of the UPV/EHU Santiago Perez Hoyos will be the speaker of the conference on 18 April. In the talk “Explorando el espacio a través de la literatura de ciencia ficción” (Exploring space through science fiction literature), Perez Hoyos will explain how space has been explored in literature, particularly through the science fiction novels written from the 21st century on. Through the analysis of some examples, the astrophysicist will discuss the difficult relationship that has always existed between narrative license and scientific rigour, as well as how science fiction literature has contributed to enriching the ideas of humanity regarding space.

The series of lectures will end on 19 April with the presentation of “La geología fantástica de Verne, Poe y H.P. Lovecraft” (The fantastic geology of Verne, Poe and H.P. Lovegraft). Blanca Maria Martinez Garcia, geologist and researcher at the Aranzadi Science Society, will speak about three renowned fantasy and horror literature authors who used geology as the central axis of their works.

All talks will begin at 7:00 p.m. Tickets must be collected at the Azkuna Zentroa information point and access to the venue if free.