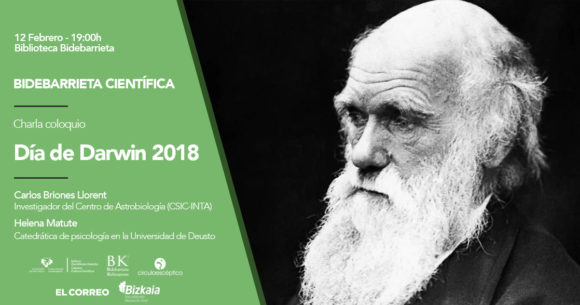 On 12 February, Bidebarrieta Library in Bilbao will host the 12th edition of Darwin Day, which each year commemorates the birth of the author of the Theory of Evolution by Natural Selection.

The conference, which will begin at 7pm, will consist of two talks by Carlos Briones Llorente, researcher at the Astrobiology Centre (CSIC-INTA), and Helena Matute, professor of psychology at University of Deusto. After the talks, which will bring the audience closer to the English naturalist’s popular theory from different scientific perspectives, there will be a final discussion in which attendees can participate.

The talk by Briones, entitled “The First Steps of Darwinian Evolution”, will address the scientific advances of research into the origin of the first living beings. The scientist, specialised in the origin and the early evolution of life, will show how the first steps of the Darwinian evolution laid the bases for the construction of this biodiversity of which we form part.

Matute will give a talk called “Cognitive Biases and Evolution”, in which she will bring the so-called cognitive biases, errors systematically committed by all people and which depend on how each mind is configured, to the library in the capital of Biscay. In her talk, the professor will address the ins and outs of these thought “short-cuts”, which have arisen in an evolutionary context and have their own raison d’être.

The journalist, Alfonso Gámez, will be in charge of leading these talks, which are part of the “Scientific Bidebarrieta” series, an initiative organised every month by the Chair of Scientific Culture of the UPV/EHU and Bidebarrieta Library to discuss current scientific issues.

All of the talks are free of charge and open to all, subject to seating capacity. However, in order to enter, invitations must be obtained from the library, which are available from 5 February. Invitations can be collected from 10am to 2pm and from 4pm to 8pm, Monday to Friday.

For those who are not able to attend, the talks are streamed live here.

Carlos Briones is a Doctor in Chemical Sciences (specialised in Biochemistry and Molecular Biology) from the Autonomous University of Madrid, with a Doctoral Thesis at the “Severo Ochoa” Molecular Biology Centre (CSIC-UAM). Briones is the CSIC Resident Scientist at the Astrobiology Centre (CSIC-INTA), associated with the NASA Astrobiology Institute), where he has led a group that is researching the origin and early evolution of life, replicative systems based on RNA and the development of biosensors, since 2000.

Helena Matute is a psychology professor at University of Deusto, where she runs the Experimental Psychology Laboratory and researches human learning and memory, more specifically issues related to cognitive biases and causal illusions. Matute has been the President of the Spanish Society of Experimental Psychology and the Spanish Society for Comparative Psychology, which is the speciality that studies cognitive processes in the different animal species.

Darwin Day has been celebrated in Bilbao since 2007. Since then, the conference has included the participation of leading figures from science and dissemination, such as Francisco J. Ayala, Pilar Carbonero, Juan Luis Arsuaga and Manuel Toharia, among others. This has turned the talks into an important event for science lovers in the capital of Biscay.

This event is organised by the Skeptical Circle, the Chair of Scientific Culture of the UPV/EHU and Bidebarrieta Kulturgunea. El Correo newspaper and the Provincial Council of Bizkaia also collaborate in it.